I have been looking forward to spending some quality time with a Ray Ross bridge ever since I met Aaron Ross and his prototype bridge at the 2017 Summer NAMM Show. One of the most heard phrases when meeting friends at a NAMM trade show is, “See anything cool?” My instant response that year was to show a photo I took of Aaron holding this super unique bridge in his hand. It’s certainly generated a lot of buzz, and I’m excited to see it go mainstream. It’s not often that someone takes one of the “basic” pieces of hardware and comes up with something truly different. There is no saddle, so the ropes pass through holes in the height-adjustable posts which are located approximately where a traditional saddle would be located. There is no bend or break angle, and the witness point at the bridge is actually the ball of the string. We could discuss the technical ramifications of this design in much more detail – and in fact, Bass Gear Magazine hopes to dive deeper into the Ray Ross bridge at some point in the future – but more importantly, here, “How does it work/sound on this bass?”

First of all, I have to say that I don’t see any obvious downsides. Any adjustments you would like to make in terms of string pitch or intonation are easily accomplished. Spacing is fixed at 19mm (although a choice of 17mm or 19mm is available for the 5-string version). The tone of any bass is by necessity the sum of many parts, so it’s impossible to isolate the impact that this bridge brings to that bass without swapping different bridges, which we haven’t done. [yet…]. But this bass is certainly very lively, clear and organic, without losing depth and breadth, and I feel like the Ray Ross bridge helps with that.

The neck is rather thin and feels very “fast”, which I like. The body also looks very slightly undersized and it has some nice lines, especially in the back around the ‘bolt-on’ neck joint. This JXB is certainly a very comfortable bass to play, all around.

Using the Aguilar module, with both pickups balanced and the tone controls set “flat”, the tone is full, a bit “burpy”, and nicely clear and articulate. Soloing the neck pickup dials in a bit more ‘bark’ and ‘wool’, as you’d expect – the tone gets smoother and slightly quieter as you bring the bridge pickup back into the picture . Soloing the bridge pickup also gives predictable results, although this Ulyate pickup doesn’t seem to thin out as much as most J-style bridge pickups when soloed. There are definitely usable tones across the full travel of the blend knob.

The OBP-3 lets you dial in a nice high-end boost without any extra hiss (nice!). I have to say this is an exceptionally quiet bass, in terms of noise. Very impressive! Treble cut is effective, but doesn’t sound or behave quite the same as a passive tone reduction. As for the bass knob, it can really add a lot of boost. I found the bass cut produced usable tones over twice the travel as the boost, but this may have to do with personal preference and associated gear. The mid boost/cut is quite powerful, and like most midrange controls, I found more musical settings when cutting, as opposed to boosting. My favorite setting was to leave the bass and mids flat and boost the treble by about 25%.

I really dig the volume/volume/tone setup, and found myself favoring either the full-throttle two pickups, or the full-throttle neck and slightly rolled bridge. The JXB sounds a bit more organic and raw in passive mode (and a bit more refined, in comparison, with the preamp). With its pickup configuration, this JXB is quite flexible in passive mode, and very flexible with the Aguilar module. 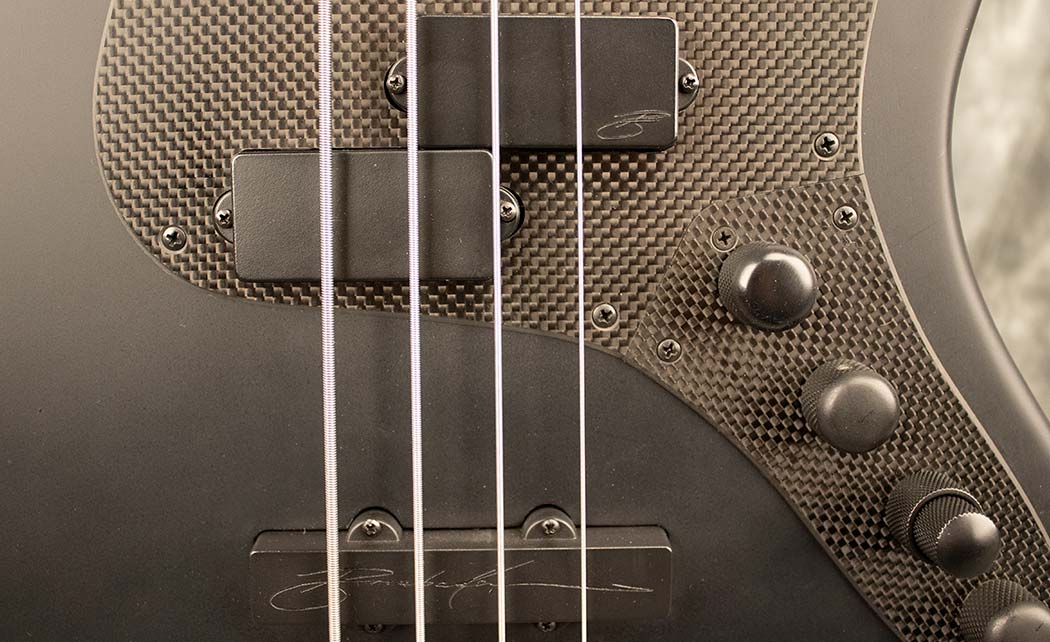 AP/J by any other name

As I mentioned, I really like the P/Js, and had a few to compare with the JXB. The first is my Fender Ultra Precision Bass®. One thing I’ve noticed with the Fender is that the overall volume gets louder with both center pickups, compared to soloing the neck pickup. The JXB (and most other P/Js I’ve played) behave the opposite of this, with the solo P pickup being a bit louder than the two balanced pickups. The Fender’s bridge pickup is also very hot, which may contribute to this. Overall, the Ultra is a bit brighter and a bit more “burpy”, while the Brubaker is more focused and balanced in its range (especially in the mids). The JXB is also slightly darker (but not really dark), and looks very “connected” from top to bottom.

Next comes another Fender, a Duff McKagan Deluxe Precision Bass®. The Duff Deluxe and the JXB were actually in the same general wheelhouse, tonally, when both were tuned “flat”, although the Duff is a bit more meaty/woolly, and the Brubaker is a bit more clear and focused. Both basses definitely sound like “P/J”, but the JXB is more tonally flexible. The neck and body of the JXB are significantly slimmer than those of the Duff.

Finally, I pulled out an ESP LTD Frank Bello FBJ-400. The ESP is more similar in overall feel (especially the neck) and tone to the JXB than either Fender. The Brubaker is a bit more lively and a bit louder, but it’s close. To make the ESP sound closest to the JXB (with both pickups centered), I had to favor the ESP’s neck pickup slightly. But again, especially with the Aguilar module, the JXB is significantly more flexible.

Words by Mixdown Staff Bass compressor pedals and rack units to enhance the presence of your bass In the ever-expanding family of effects pedals, compression is perhaps the most misunderstood effect of all. It’s not the source of thunderous, earth-shattering distortion. Nor is it responsible for producing the rich, shimmering nature of a quality chorus, […]

Another potentiometer, accessible through a small hole in the control cavity cover, adjusts the volume in active mode. While Jens prefers that there is no difference in volume when switching from passive to active mode (this is also my personal preference), some gamers have told him that they like having a volume boost when switching […]