Sales of electric guitars have fallen 22.7% since 2008, in part due to declining demand from younger buyers. Surprisingly, acoustic guitar sales are an entirely different story.

Last year, the Washington Post reported that electric guitar sales have dropped 33% over the past ten years, from 1.5 million units per year to 1 million currently. Now there is more data showing a precipitous decline.

According to data shared by Music Trades, which tracks annual instrument sales in North America, electric guitar sales have fallen 22.7% over the past decade. The report counted sales of 1.452 million guitars in 2008, a figure that had slipped to 1.123 million units in 2017.

Ironically, the report was shared by a representative from Guitar Center, who sent the report to show a revenue to augment over the past year. But this increase seems temporary, with the general trend since 2008 showing a sharp decline.

Here’s a look at unit sales of electric guitar sales in North America, broken down by year (a more detailed breakdown is below). 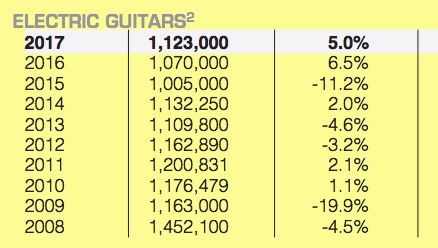 The report shows a severe lull in sales in 2015 and 2016, which may have served as the basis for the Washington Post report. In both years, unit sales are just over 1 million units, before posting a slight increase in 2017.

Surprisingly, it seems that the average price of an electric guitar is increasing.

Specifically, the average price of an electric guitar rose from $390 in 2008 to $525 in 2017. This could indicate a greater effort to sell to wealthier buyers, especially baby boomers. Or, it could reflect a more serious problem attracting younger buyers, who may be more interested in entry-level, inexpensive guitars.

These price increases increase overall revenue, according to the report. It is unclear if these prices are adjusted for inflation or if they will be sustainable.

This increase could be based on a number of factors. For starters, the acoustic guitar category has many subcategories, including banjos, dobros, and mandolins. Crucially, that doesn’t include ukuleles, which have reportedly been booming, but mega-hits like Mumford & Sons could spark greater interest in other non-electrified fretted instruments.

It’s also worth nothing that overall revenue seems to be increasing in both categories, although it’s important to note that Music Trades does not record the actual price of the transaction (purchase) in their breakdown. Instead, Music Trades uses higher wholesale and retail values, which may not reflect what the customer is actually paying. 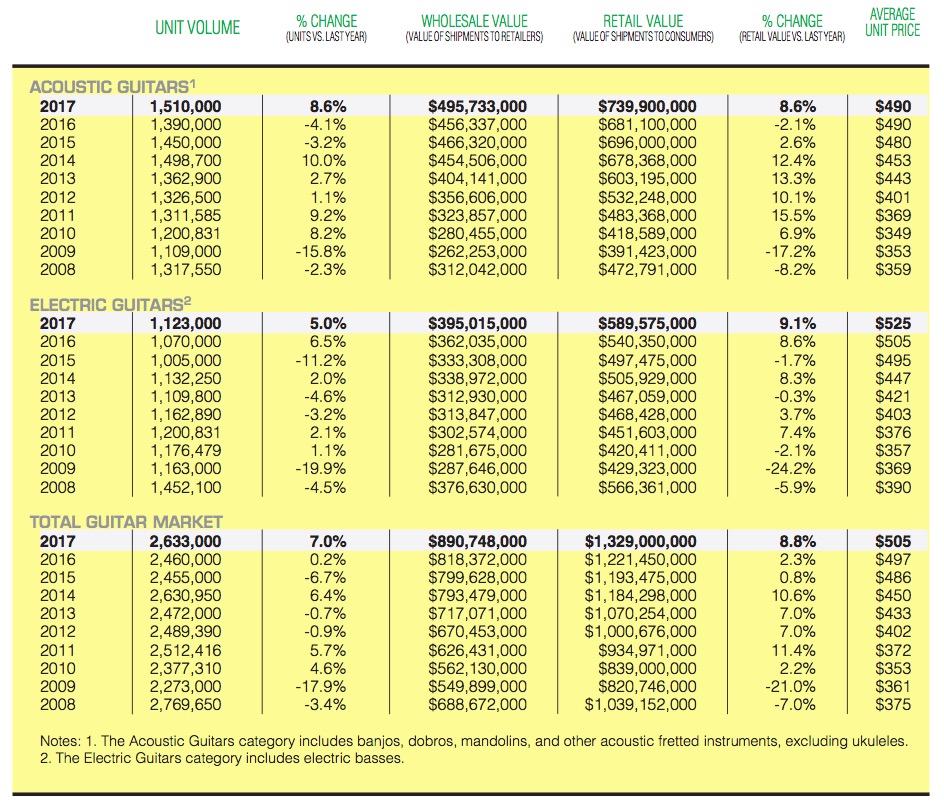 Just recently, the guitar maker filed for Chapter 11 bankruptcy, due to weak sales and an inability to excite customers around add-ons and digital features. Incidentally, Guitar Center said Gibson’s situation will not impact its broader sales, although Guitar Center remains heavily in debt and potentially in danger of declaring bankruptcy itself.

Image credit: Spitfire Audio Treat yourself to not just a free guitar plugin, but a whole collection of electric guitar sounds from LABS. The brilliant minds at Spitfire Audio have done it again. the LABS plug-in for electric guitars gives you all the guitar tones you could want, from indie pop to classic rock – […]

Nashville, TN (September 26, 2017) — With the new Blue Label electric guitar strings, Framus has paid particular attention to deep tunings such as Drop D, Drop C and Drop A as well as string sets for 7- and 8-string guitars . Sets for standard tunings, in Light, Custom Light, Regular and Heavy versions are […]

When we discuss the sound of microphones, we are left searching for hopelessly imprecise words. Warm. Jangly. Chimney. Of meat. Picked up. Of butter. Dynamic. Twangy. Box. Glassy. Rather than providing a guide that offers vague adjectives like a pick-up sommelier, we let the pick-ups themselves do the work. Cover the screen and quiz your […]